Fishing is a peaceful, relaxing hobby. It’s just you, the water, and perhaps one or two calm companions. What could help the stress of our busy lives melt away faster?

At least, it’s supposed to be relaxing. The promised tranquility can quickly change to annoyance and frustration over problems like poorly spooled fishing rods, twisted lines, and knots.

Aside from the frustration and time wasted in fiddling with the fishing rod, these problems can mean that you aren’t casting as well as you should. In fact, it can affect your whole fishing performance, and overall end up ruining a perfectly good day of fishing.

To avoid these issues, it’s generally recommended to respool your own rods, even if a new fishing rod comes ready spooled. There’s plenty of wrong ways to spool a fishing rod, but what about the right ways?

We’ll briefly discuss how to spool a fishing rod.

The first step is to choose a suitable line to connect to your spool. It’s especially important to choose carefully if you’re replacing a line on a fishing rod that was already spooled. A line that’s too short will, of course, mean less line retrieval, but a line that’s too long means twists, knots, and other infuriating problems.

A slackline also means twists and knots, so be sure to keep the line as taut as you can during the attaching and reeling process. There’s no need to rush; take your time. Rushing might only lead to mistakes that have to be fixed later.

If you’re new to fishing, it might be wise to stick with the line already in the spool. However, if you’re an experienced fisherman, you likely already know which line works best for you.

For example, if you’re using floating baits, choose a monofilament line, but if you’re bottom fishing, you will likely prefer a braided line.

Before you move on to the next step, it might be a good idea to establish which way your spinning reel turns; clockwise or anticlockwise. It’s likely to be in a clockwise direction but check now. It’ll come in handy later. Be careful with this next part, as incorrectly attaching the line might lead to line twisting later, when it’s harder to fix.

If it’s a spinning reel you’re spooling, the easiest way is to attach the line to your rod and run the line from the spool to the reel. The line guides should help.

Open the bail, and run the line through the eyelets to the reel spool. Carefully lay the line spool on the ground, label side up. Keep an eye on the line spool to make sure it isn’t getting twisted. Alternatively, have a friend hold it for you.

Next, you need to attach the line to the spool with a knot. An arbor knot is the most popular, which is a traditional fisherman’s knot, designed to tie a fishing line to a spool.

It’s important that this knot is tight and firm. Be generous when tying off, since you can always trim off any extra line later.

An arbor knot is ideal for fishing because the more pressure is applied to the line, the tighter it gets. It’s a simple knot, and if you plan to change your own spools often, it’s a good idea to learn how to tie an arbor knot.

Once you’re sure the knot is firm and the line is securely attached, close the bail. Tug on the line to tighten it.

Now, hold the rod and reel the way you normally would. Have the line spool in front of you, or have a friend hold it. For minimal line twist, it might be best to get someone to help you.

If your spinning reel turns clockwise, this means you want to line to come off the spool in the opposite direction. The opposite is true if your reel turns counter-clockwise.

Now, reel the line onto the spool. Ideally, you want to reel the line off the spool onto your reel in the same direction it was put onto the spool. This can be tricky but dramatically reduces line twist, meaning your fishing performance will likely be better. A good tip is to pinch the line lightly, about 12cm above the reel, pulling the line tight. If you’ve followed all the prior steps successfully, and you see the line smoothly spooling on your reel, you might get a bit excited.

Don’t get carried away! It’s important to avoid over-spooling. The spooled line should never come to the lip of the reel. Ideally, you should leave at least an eighth of an inch of space at the lip of the reel. Otherwise, you risk tangles, knots, and may even hurt your casting performance.

Once you’ve filled your reel to the proper amount, congratulations! You’ve spooled your fishing rod. Now it’s up to you how you store the spooled rod until your next fishing excursion.

First, however, the supply spool probably has far more line than you need on your rod, so you’ll need to cut off the line. Leave some excess line for attaching a lure, but you don’t need too much. Use scissors or line cutters, and you might also want to use a piece of tape to attach the free end of the spool line, to prevent unraveling.

If you need a recommendation for a great fishing rod, go check this one out on Amazon: 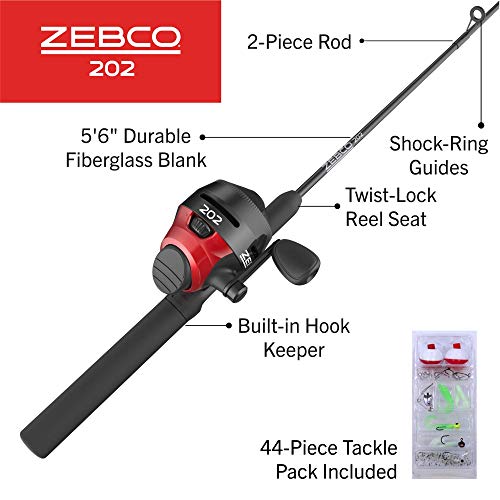 There are plenty of reasons why you might want to spool your rod yourself. The line in the rod might not be suitable for the kind of fishing you’d like to do. Perhaps you aren’t happy with the line in a rod you’ve just bought, or perhaps you just prefer doing it yourself.

Either way, once you know how to spool a fishing rod, you’ll find that it’s a simple procedure. With a bit of practice, you’ll be spooling like a pro in no time.